Here is a headband or cowl to match the Easy Breezy Beanie that I published a few weeks ago. The headband is perfect for the summer as it does the job of keeping the hair back, but won’t contribute to too much heat.

Finished Size: When laying flat it measures 9″ across and 2.75″ wide. However, it can be crocheted to any length and width.

Note: When you work 2 hdc’s into the same stitch or space, think of these as a set, or a mini shell. Then when you crochet your next round and the pattern says “2 hdc in sp before next hdc”, work these in between the previous set of hdc’s. Below are two images that might help. 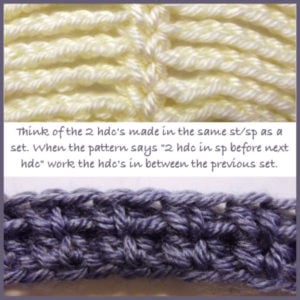 Ch 70 (or any multiple of 10); join with sl st in first ch being careful not to twist chs.

Thank you so much to my testers for testing this: