Home / Crochet Tutorials / How to Crochet a Magic Circle 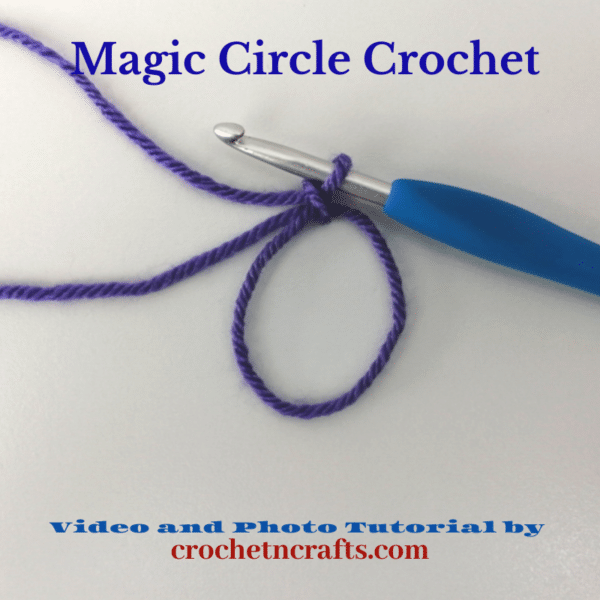 In this tutorial, I’m going to show you how to crochet a magic circle. In addition to the photo tutorial, I’ve also included a video tutorial.

The magic circle, also known as the magic ring, is a great way to start your crochet pattern when you want a nicely closed center. The magic loop crochet technique is perfect for starting hats that are worked from the top down; as well as any projects that are worked in the round, such as granny squares, amigurumi and doilies.

The magic circle is very easy to make; easy enough for crochet beginners.

I rarely use the magic ring in my patterns, but you will see it from time to time. Here are a few to get you started: Bulky Crochet Baby Hat, the V-Stitch Adult Hat and this cute little drawstring pouch.

For a long time I could never remember how to make the magic ring because of the way that I was wrapping the yarn around my hand. So every time I wanted to make it, I had to google it. And I swear every time I came across a different tutorial, so it didn’t have a chance to stick in my mind.

Until one day that is of course when I realized I was wrapping the yarn very similar to the way that I would if I were to crochet. So you may have to find your own way as well, as long as you follow the technique.

Step 1: When I first learned how to make the magic circle I could never remember how to weave it around my fingers in order to start it properly. So I came up with this method: I wrap the yarn around my fingers the same as I would if I were to crochet. This helps me to secure the ball end of the yarn, also known as the working yarn. (Right-handed crocheters wrap around the left hand and vice versa.)

Step 2a: Then I bring the tail end down and wrap it around my middle two fingers.

Step 2 b: Wrap it around the center fingers and secure between the thumb and pinky. This gives you an adjustable loop that you can crochet into and then pull tight.

Step 3a: Insert the crochet hook underneath the loop and pull the ball end through. You now have one loop on hook.

Step 4: Make your starting chains. For this tutorial I made one chain because I’ll be working with single crochets. For double crochet stitches you would make at least two, and so on to bring the chains to the same height as the first stitch of the round.

Step 5: Make your first single crochet into the circle making sure to work it over the tail end of the yarn.

Step 6: Continue to single crochet into the ring and over the yarn tail.

Step 7: Once all stitches have been made, pull the tail end tight in order to close off the magic loop. 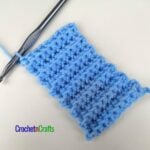 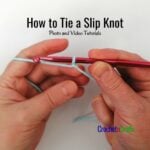 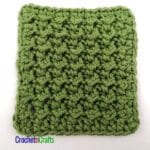 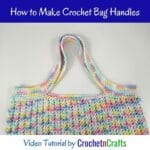 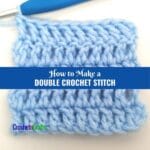 1134 shares
Previous Post: « How to Make the Puff Stitch
Next Post: Marking the First and Last Stitches in the Rounds »