This hat is super cozy due to the layer of surface crochet. And then I made mine extra long so I could fold the ribbed edge up for an even thicker layer around the ears and forehead. The little dude in the picture is looking a wee bit sad as he was rather warm during the photo shoot. But he won’t be sad when the cold weather hits because he’ll be nice and cozy then!

As with most of my hat patterns, this hat can be increased or decreased to any size that you need in a simple multiple of two. Simply crochet your ribbed edge to a comfy fit around the head to fit any baby or adult. Just remember to keep your surface crochet stitches loose in order to keep the hat stretchy for a comfy fit.

And, it’s perfect for both genders… just choose your colors accordingly.

Other Crochet Hat Patterns to Try 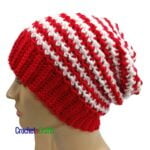 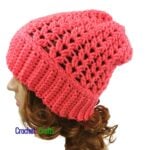 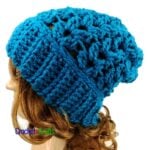 Finished Size: Laying flat it measures just under 8″ across and 10″ long. Fits a 6-12 month old baby, however, it can be crocheted to any size as desired. I made mine extra long so the brim can be rolled up for a double layer around the ears.

When working the surface crochet stitches, make sure to keep them loose to allow for the hat to remain stretchy. You may need to go up another hook size.

Surface crochets are worked into the posts of the stitches, and not into the front loops. (Front loops are left unworked to add more texture on Right Side of fabric.)

Refer to this tutorial by Moogly on how to do the Surface Crochet.

To make the pom pom, use a pom pom maker or the palm of your hand. Here is a short tutorial on how to make a pom pom.

Rows 2-54: Ch 1, blsc in each sc across. Turn. (9 sts) Continue with this row until you have reached a desired circumference making sure to end in an even number of rows.

Ch 1 and join the ribbing rows by slip stitching the last row to the free loops of starting chs.

Rnds 4-15: Rep Rnds 2 and 3 working a round of surface crochet in between the sts of each Rnd.

Surface crochet with CA as established above.

Surface crochet with CC as established above.

Fasten Off CA leaving a 10″ tail for closing the circle. Weave the tail end through last Rnd and pull tight. Weave in to secure.

Make a Pompom using all three colors and attach it at the top.

You might also enjoy a browse through the crochet hat collection at CPB.