This is a sturdy pom pom rug in the shape of a watermelon slice. It will look good in just about any kitchen, or at the front door to welcome your visitors. It is made by attaching your pom poms unto a rug canvas for a nice sturdy mat.

Tools and Materials needed to make the rug:

A Rug Canvas. I used a 3.75, Graph N’ Latch Rug Canvas made by M.C.G. Textiles. You can purchase it on Amazon if your local craft store does not carry them. You only need a 20″ by 36″ canvas to make one rug. However, they sell them in a slightly larger size, which you can then trim after all the pompoms are attached. GRAPH N’ LATCH RUG CANVAS W/GRID 30X36 3.75 MESH- (affiliate link)

You can make your pom poms around 2 of your fingers. However, to make it easier, I used the small end of a POM POM MAGIC, which is about the same size as 2 fingers.

Other tools that you will need is a pair of scissors, a yarn needle and some kind of hook to pull up the loose ends of the pom pom strings from the wrong side of the canvas. (I used a crochet hook and it worked well.)

If you do not know how to make pom poms, click here for a tutorial. The tutorial does not specify how many wraps you should do for each pom pom, but 60 to 70 wraps should be enough to get nice full pom poms.

You will need to make:

132 Green Pom Poms,
About 250 Solid Red Pom Poms
About 74 Red and Black Pom Poms (these are the watermelon seeds which you will mix in with the red pom poms roughly about every third to fourth pom pom, as it seems right to you). The solid red, and red and black pom poms should come to a total of 324.

To make the red and black pom poms, simply wrap the red yarn around the pom pom maker about 60 times, and then do about 5 to 7 wraps of the black yarn. Continue as you would with the other pom poms. 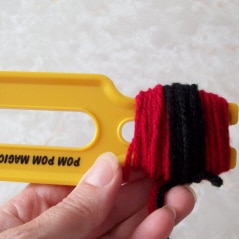 Attach your pompoms in rows to the canvas as described in the following instructions:

1.) The pattern is worked in horizontal rows, with the 36″ side facing you.

3.) Always skip 3 threads, and attach your pom pom to the fourth thread within the horizontal row, as well as within a vertical row. (See picture below) 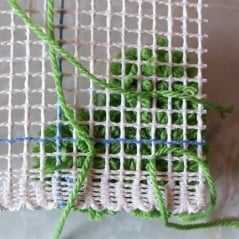 4.) When the pattern says to indent 1 vertical row, attach your pom pom above the second pom pom of the previous horizontal row. (See picture below) 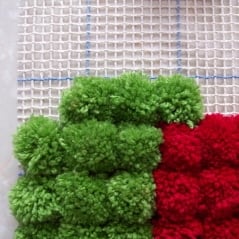 5.) When the patten says to indent 2 vertical rows, attach your pom pom above the third pom pom of the previous horizontal row. (See picture below) 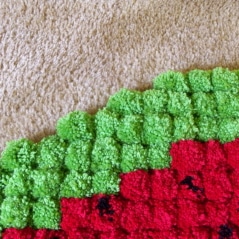 6.) When the pattern does not state to indent, then attach your first pom pom directly over the first pom pom of the previous row.

7.) The pom poms are secured with a double knot on the wrong side of the canvas.

8.) After each row is completed, take the time to pull up the tie strings with a hook through the canvas. You can trim them to the same height as the pom poms as you go, or wait until the rug is finished and then trim them all at the same time. (You can also wait to pull up the strings until the end, but it will be harder to get at them with the hook.) 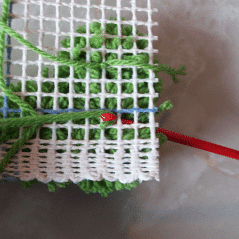 Row 1: With the 36″ inch side facing you, attach your first green pom pom about 3 to 4 threads into the canvas as pictured below. Attach another 2 green pom poms, then attach 28 red pom poms, and another 3 green. 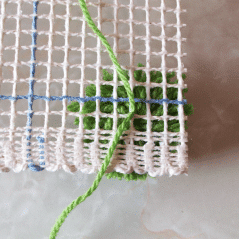 When all your ends are pulled through and trimmed, you can continue with the edging. 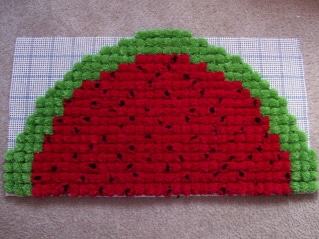 Cut around your rug leaving approximately 3 to 4 threads for you to fold over and secure with yarn or strong thread. 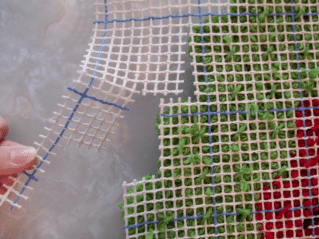 To secure the edges, simply fold the canvas over to the wrong side as you go. And with a needle and strong thread secure the canvas threads along the outside thread, as well as the second and third thread from the edge for extra strength. (See picture below) 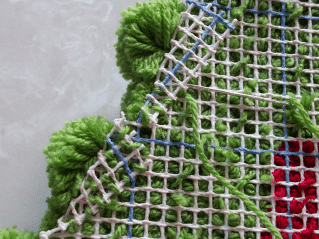