Crochet this simple soap cozy up for yourself, or for giving away in a bath gift basket. It’s just the right size for a standard bar of soap. It’s also great for traveling as it keeps the soap safe from the rest of your travel items.

This soap cozy also helps to keep the soap dry by absorbing the wetness after a bath or shower. So you may want to keep it hanging up so it dries nicely. With that said, you can also use this as a handy scrubbie in the bath. The vertical textured lines are not only pretty, but they act as a natural scrubber as well.

Another use for this cozy is for a neat drawstring pouch. It’ll make for a nice candy or treasure bag for young children.

What Yarn to Use

I used a medium worsted weight cotton yarn, Bernat Handicrafter. The cotton is natural, which makes it safer on skin, especially for those with sensitivities. However, cotton can take a long time to dry as opposed to an acrylic yarn. Acrylic yarn also tends to stretch out a lot. 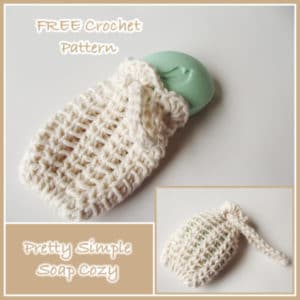 This crochet soap saver makes a nice gift idea when gifting handmade soap. It can be used as a washcloth and also for collecting the small pieces of soap.
No ratings yet
Pin Pattern Share on Facebook