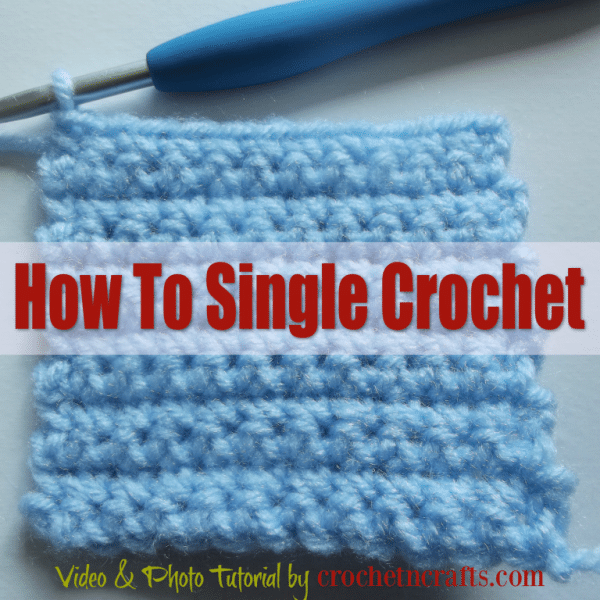 Learn how to single crochet with this step-by-step photo and video tutorial. In this article I also cover some common questions on the single crochet along with some tips.

The single crochet stitch is commonly abbreviated in patterns as “sc” and is the perfect stitch for beginners to learn how to crochet. As a matter of fact, it’s the easiest stitch to learn for absolute beginners.

Aside from the chains and slip stitches, the American or US single crochet (as demonstrated in this tutorial), is the shortest stitch in crochet.

But don’t be fooled by the simplicity of the stitch! It’s a beautiful stitch that you can incorporate into almost any kind of project.

Common Questions About the Single Crochet

Are the Single Crochet and Slip Stitch The Same?

No. There is a difference between a slip stitch and a single crochet.

A slip stitch is when you wrap the yarn over the hook and pull through all the loops on the hook. The slip stitch is commonly used to join rounds and finished crochet squares.

The single crochet on the other hand has height to it.

What is single crochet in UK?

Would it surprise you to find out that the UK does not have a stitch that is worked the same as it is in this tutorial? Instead, their single crochet is the same as the American double crochet.

What does a single crochet decrease mean?

What does a single crochet increase mean?

This is simply when you work two or more single crochet stitches into the same stitch below in order to increase your stitch count.

Why does my single crochet curl?

Tension is a primary reason if your work curls. Most likely it’s too tight, so loosening up a bit or using a larger hook can often solve the problem.

If your work curls in the first row of single crochets, it could be that your foundation chains are too tight. A solution to that is to use a larger hook for the chains.

Can You Single Crochet a Blanket?

How to Make a Single Crochet Edging

A single crochet edging can do wonders in straightening out any rough edges.

It’s also a good foundation around the edge if you plan on doing a fancy border. The reason being is that the stitch is small and therefore, it’s easy to manipulate the correct amount of stitches that you may need before you begin your border.

To make the edging, simply single crochet evenly around your work so that it doesn’t pucker or cause the edges to become stretched out. Then as for your corners; work three stitches into each corner in order for them to lay flat. If you do less, the corners may curl.

What does single crochet look like from the Right side.

The right side is the side that faces you when you crochet in the round without turning. It gives you a nice clean look. It’s a simple stitch that looks great in amigurumi and so many other projects!

What does the single crochet look like from the wrong side.

I always prefer the right side, but the wrong side is not to shabby for this stitch.

It looks great when worked in rows where you have both sides, the front and back of the stitch, showing.

Other Tutorials to Check Out 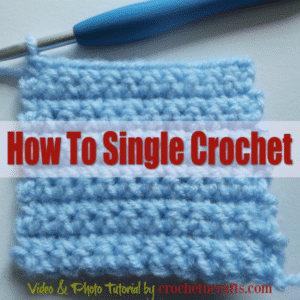 How to Single Crochet

The single crochet tutorial below demonstrates how to make the stitch using a medium worsted weight yarn and an H crochet hook; but you can use any yarn and hook size to practice.
2 from 1 vote
Pin Pattern Share on Facebook

How to Make the Single Crochet

How to Single Crochet Into a Chain

Single Crochet in the Round