A lot of times I buy the cheap hair scrunchies they have at the dollar store. I like them because they are so cheap, but they also tend to pull my hair a lot, which I don’t like. Crocheting around the scrunchie helps to coat the rough elastic so that it doesn’t happen.

The scrunchie pattern is actually quite simple to crochet, but due to the popcorn stitch, it is not suitable for someone who is still learning how to crochet.

The image in the top left shows a scrunchie I made using a size 3 crochet thread. On the bottom is a picture of the scrunchie worked in a worsted weight yarn. It’s a lot bulkier than the one in crochet thread, and thus, may not work to wrap around more than once.

To be honest, I prefer the one in crochet thread as it is much smaller and looks more elegant. And because it is smaller, it is also more suitable for wearing with a hat. Also, I think it would be perfect to go with any young girl’s outfit.

The only downfall of this scrunchie is that it can get tangled up in long hair. As a result, I posted a variation below, which was suggested by one of my testers. The variation has less loops, making it less likely for it to tangle. Thank you very much for the helpful suggestion.

Pattern was Tested By:

Pc: Ch 3 (counts as first dc), work 4 dc in designated st, remove hk from lp and insert from front to back into first dc of the 5 dc made, pick up the dropped lp and pull through.

Working into 4th Ch from Hk 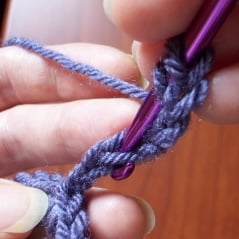 Working into Top of Dc

Ch 3 and First Dc Made 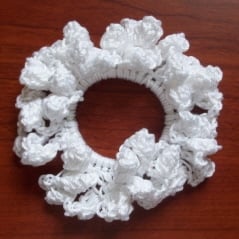 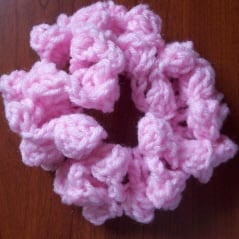 This variation helps to take some of the bulk out of the scrunchie and might be more suitable if you have long hair. There are less loops, making it less likely for the scrunchie to become tangled in the hair.

Rnd 1: Work the same as above. 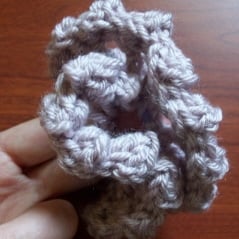