Here is another chained picots necklace cowl. It differs from the previous cowl as it’s joined at each round to hold it together along one seam. It is great for the summer or winter because you decide how full you want it by doing more or less rounds. Thus, it can be worn as a necklace cowl or as a cozy winter cowl.

The cowl is shown short with one wrap, but you could easily crochet it longer for a second wrap or wear it down to your waist if you wanted to.

It’s basically like one long chain, but each round is joined with a slip stitch in the first single crochet. That way you can wear it with or without the optional wrap to hold it together. The first image below shows the cowl with the wrap worn off to the side.

The image below shows the cowl without the optional wrap. It’s just the bone ring buttons attached to the single crochet seam. This is actually my preferred way of wearing it… but….

You can also hide the buttons at the back for a nice full look at the front. It’s great if you have long hair, or if you plan on wearing it under a coat.

The stitch pattern is simply the picot stitch worked in between a series of chains. It’s super easy and a great way to use up your odds and ends!

I used Loops and Threads Soft and Shiny along with a G and an H crochet hook. But honestly, you can use any yarn and hook sizes that you want. Just make adjustments in the first round to get to the length that you want.

Another option that you have is to work it up in pretty stripes or rainbow colors by changing your colors after ever round or two. 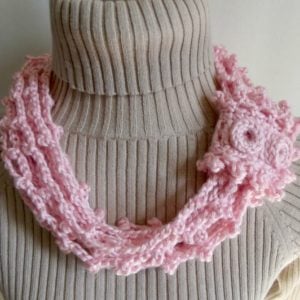 You can make this necklace cowl as long as you want by doing more repeats in round one.
No ratings yet
Pin Pattern Share on Facebook

Optional Wrap for the Cowl