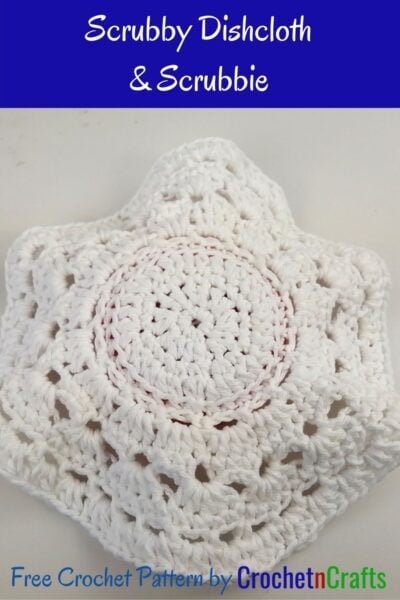 This scrubbie dishcloth is handy to have in your kitchen as it is not only perfect for your toughest scrubbing needs, but it is also perfect for washing your finest dishes. On one side you have all cotton, which is gentle on your dishes, and on the other side you have a nice scrubbie attached for tough baked on messes.

In addition to a scrubbie dishcloth, this pattern also provides instructions for a scrubbie, a coaster, or just a plain cotton dishcloth. Make one or make them all and have them ready to gift as a housewarming gift.

Regardless of which item you’d like to make, this pattern is started off with a magic circle. As for stitches, all you need to know is the chains, single and half double crochet.

The scrubbie is joined at round 5 by picking up the back loops of your crochet stiches along with a few strands of the scrubbie to keep things secure. This process might be a bit awkward at first, but it’s really not hard to master.

Once the scrubbie is secured, you have the option to fasten it off after two more rounds. Or continue with the full 12 rounds for a nice dishcloth.

Alternatively you can leave the scrubbie off altogether if you like.

For the yarn you will need a dishcloth cotton because it holds up much better when it comes to scrubbing. Bernat Handicrafter Cotton is a #4 worsted weight cotton that works well for this.

As for the scrubbie, you can just go to the dollar store and pick up a pack of cheap scrubbies. The size should be between 3-4 inches in diameter. Mine were 3.5 inches, but there’s wiggle room if needed because you can join the cotton further to the top or further along on the side of the scrubbie if needed. It shouldn’t really matter where it is joined, as long as it is secured. 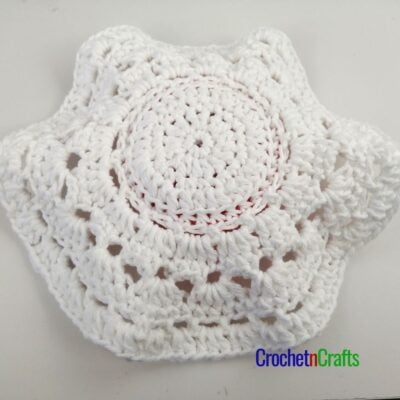 Make a scrubbie dishcloth, a scrubbie or a coaster by following this simple pattern.
5 from 1 vote
Pin Pattern Share on Facebook