This is my version for a crochet Santa wine cozy. It works up quick and fits a wine bottle that’s 3″ in diameter. It makes for a great gift idea during the Christmas holiday for just about anyone in your circle, including your parents, friends, neighbors, and even your boss.

You could also use this as a holiday decoration in the kitchen or with whatever display you have in your living room.

This crochet wine bottle cozy is for a complete Santa suit with a belt, necktie and collar. I’ve also included a cute hat, which you can use basically on any wine bottle without the bottom part. I added a cute pom pom to the top of the hat, which is easy to make using the same yarn as what you used on the hat.

The stitch pattern for this wine cozy is very easy. It is started at the bottom with half double crochets, increasing each round until you have the desired circumference.

For the next round then, you work your half doubles in between the previous two half doubles. So it’s sort of like a v-stitch, but without the chain one.

The collar is worked in one piece with the main part, but it is worked in rows and with a black yarn. If you want to make a Mrs. Claus, you could try a white yarn for the collar. Then instead of the necktie, make a little white bow.

The belt is simply embroidered on using embroidery thread. If you’re making this for Mrs. Claus, you could try a different color, and instead of making zig-zags, work several rows in a straight stitch.

As for the hat, it is started at the bottom with a white yarn. Then worked in an even pattern with the red yarn until you have reached the height that you want. At that point a few decrease rounds give it the tapered look, which goes well with a pom pom.

I used Red Heart Super Saver yarn in red, white and black. It is a medium worsted weight yarn that is readily available at most yarn stores.

It’s perfect for Santa, but for a Mrs. Claus, you could try a softer yarn. Especially for the collar and the brim of the hat, you could try an eyelash or another soft and fuzzy yarn. Eyelash yarn might also be the perfect material for her belt.

Other Wine Bottles to Choose From 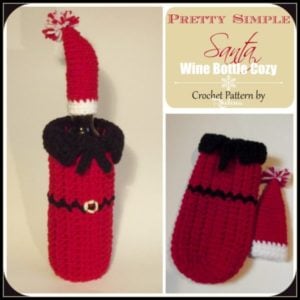 This crochet wine bottle cozy is the perfect way to gift your bottles of wine during the Christmas holidays.
No ratings yet
Pin Pattern Share on Facebook

Begin Working in Rows for the Collar.