These crochet fingerless gloves are not only simple, but pretty as well! The pattern is given in one size, but you can easily increase that in a multiple of two. Another thing you can do is switch up your yarn and hook sizes.

You don’t need much yarn or time, making them ideal for selling at craft fairs or for gifting to friends and family.

I did mine in a solid color, but you could also try working these up in a striped or two color design if you like.

These crochet gloves are started with a ribbing at the wrists. The ribbing is worked in rows until you reach the circumference that you want. Then you join the two ends and begin working in rounds.

Then for the next round, you work your two half double crochets in between the previous two stitches like a v-stitch. Pretty simple, right?

See image below or see the full Tutorial

These gloves include a thumb opening. Please note the instructions for the thumb opening placement for the right and left hands. By placing the openings in different locations gives you a left and right hand glove. This way the seam falls on the inside of both hands,

The pattern is given to fit an adult small hand. But, in a simple multiple of two you can increase the size as needed! If you are increasing the size, you may also need to work more stitches around for the thumb opening.

Another way to increase the size would be to use a larger hook! A larger hook will also give you more stretch.

I used Loops and threads Impeccable. It’s an awesome acrylic yarn, if you ask me! I guess I like it because it gives you such a nice clean look of the stitches.

Any similar yarn should work as long as it gives you the same gauge. 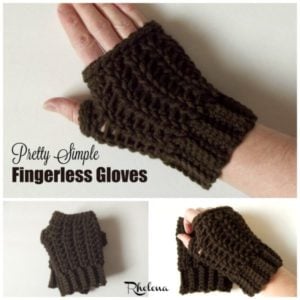 These gloves are quick to crochet. Plus, they feature a simple, yet pretty stitch pattern.
No ratings yet
Pin Pattern Share on Facebook

Working in the Round