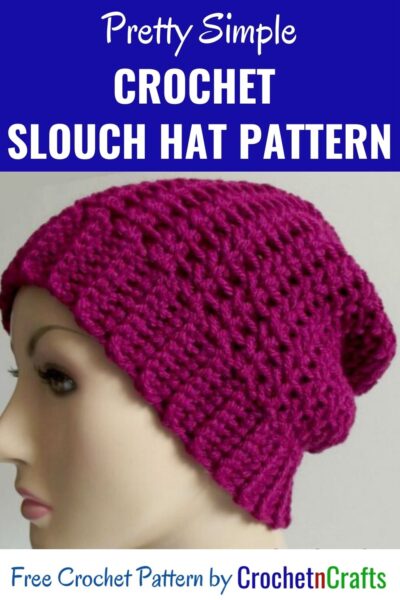 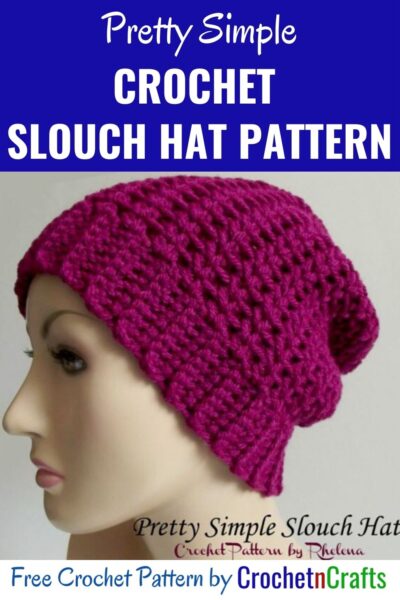 It is shown here in a solid color, but you could do rainbows, other color patterns, or whatever striped design you like. You could even use up any of your scrap yarns.

The crochet slouch hat works up quick and easy, and is pretty mindless once you get going on it. And that makes it the perfect go-to pattern for making gifts or for selling at craft fairs.

This crochet hat is worked up from the bottom to the top. First, the ribbing is worked in rows until it reaches comfortable around the head. Then you join the ribbing and begin working in rounds.

The body of the hat is a multiple of two. It is worked simply with half double crochet stitches. The first round is with 2 half doubles in one stitch, then skip a stitch. For the next round, the two half doubles are worked in between the previous set as shown below.

The easy slouch hat crochet pattern provides instructions for a teen/adult small sized hat. But in a simple multiple of two, you can easily adjust this to any size from baby to adult. Here is a hat sizing chart to help take the guesswork out.

I used Vanna’s Choice, which is a medium worsted weight yarn. It is soft and results in a nice stretchy fabric, which is always a bonus for a hat. 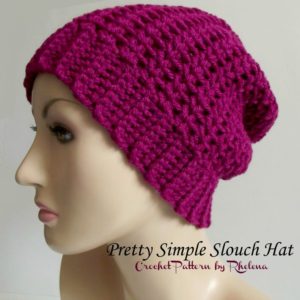 This crochet slouch hat pattern is given in one size, but can easily modified for other sizes as well from baby to adult large.
No ratings yet
Pin Pattern Share on Facebook