Not sure why, but this is my favorite cowl right now! It not only is huge, but I love the two-toned colors and the textures. And you can wear it as a regular cowl as well as a hood. I crocheted it around the Christmas holidays and it has kept me nice and toasty ever since. It’s funny how the weather dictates what you crochet. :) Anyhow, I hope that you will enjoy it too.

This pattern was named by Susan Mackie, who suggested “Yin and Yang”. Thank you so much Susan! I would have never thought about it, but it is a perfect match not only because of the colors, but because the two-toned texture as well.

It’s an infinity cowl. Which means you will have the right and wrong sides showing up on both sides. I did this on purpose because I thought it would look nice after I crocheted my In a Spiral Hat. However, if you want to avoid that, simply crochet it without the twist in the chains. The only downfall is the drape will not be as good. 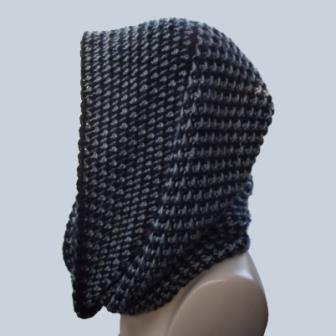 UPDATE (PLEASE READ): Many readers have asked for a better tutorial in regards to starting this cowl. I’ve tried to create a simpler version, but to no avail. It just seems confusing due to the twist in the chains, the stitch pattern and all…  and I just can’t get my head around as to how to word it in order to simplify.

SO, I decided to do a re-write of the first two rounds of the pattern instead. Instead of twisting and joining the chains, I decided it was much easier to explain if you worked the first round as a row and then make the join and the twist in the work. It’s a tad bit more work this way, but I think it’s a much simpler way to explain and I’m hoping it will be easier for crocheters to understand as well.

With that said, I’m leaving the old version as is because I still prefer starting it by twisting the chains instead of the first round. It eliminates having to join the opposite ends of row 1, as well as having to weave in an extra tail.

It’s up to you how you want to crochet this because it looks the same either way. The only thing to keep in mind is that if you work the old version of the pattern you need to begin with an even number of chains because you’re joining the round at the chains. If you decide to go with the updated version you need to begin with an uneven number because the first stitch is worked into the 2nd chain from hook. For the UPDATED Version please scroll down.

Old Version of the pattern starts here. Please disregard all notes here if you plan on working on the updated version that is located at the bottom.

Rnd 1: Make one half twist in chs and join with sl st in back bump of first ch (Place st marker in joining sl st as it counts as first sl st.) 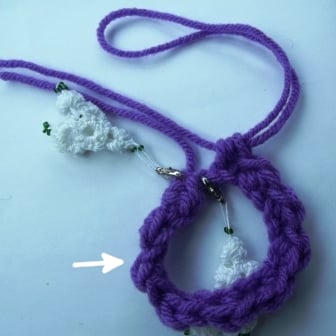 Rnd 1 Complete – See the Twist in Image Above? 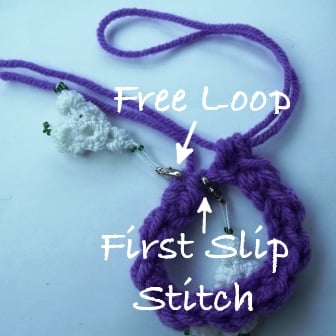 Rnd 2: With CB and working into the free loops of the starting chs, work 1 STHDC in next ch; 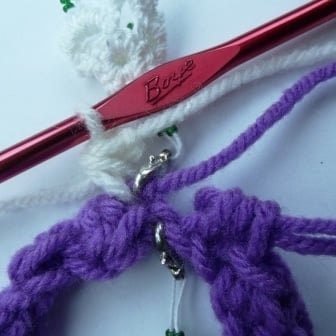 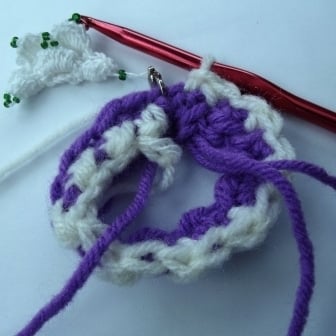 Half of Rnd 2 Completed.

Rnds 5-22: Continue with Rnds 2-3 until you have reached a desired height, ending with rnd 3. FO.

In this updated version I worked the first round as a row. Instead of joining the beginning chains, start with an uneven amount of chains and crochet into the 2nd ch from hook and all the way across. Then make your twist in your work and join the two ends to create an infinity.

In rnd 2 you will work into both sides of rnd 1 with CB. The half twist creates a figure 8, which then allows for both sides to be worked. You begin in the free loops, then work your way around and continue working into the top of the stitches made in rnd 1. Thus, in rnd 2, you end up with twice as many sts as in rnd 1.

First St in the rnd is worked into the same st as where the join was made.

Instead of fastening off, carry the yarn up after each rnd is completed.

Use any colors that you like, but I used the following for the tutorial:

Note: Halfway through rnd 2 make sure to hdc into the free lp where last sl st was made in rnd 1. Also, you want to sk the turning ch.

Rnds 5-22: Continue with Rnds 3-4 until you have reached a desired height ending with CA. FO.

Hopefully the updated version is easier to understand, but let me know if you’re still struggling with it and I’ll try and be of help.