Here is a twisted cowl crochet pattern that is worked up in the cross over long double crochet stitch. The twist is made in the chains so that you end up working on both sides of the chains in a figure 8. The twist is nice because it gives it a good drape and also sits flatter, making it great for under a jacket without adding too much bulk.

It’s a perfect match for this crochet newsboy hat. Other patterns in this set are a pair of fingerless gloves and a cellphone holder. The purse and pouch will be posted soon. Hope you will enjoy the set like I am.

Make one or make them all to make a complete gift set! You don’t need much time, or yarn! And the pattern is easy to learn for anyone who has mastered the basics in crochet.

I provided an image tutorial for those who have never crocheted a twisted cowl. It is very easy, but it can be a bit confusing when it comes to making the twist in the chains. You want to make sure that you only make a half twist, and that the twist remains. In addition, the stitch pattern doesn’t help to make it easy easier either. So I figured some images might help. Once you get past the first few rounds, you can sit back and enjoy the pattern.

The crochet cowl is started with single crochets in the chain. I found it easier that way, and it also made the transition easier into that continuous round! Yes, the rounds are worked in a continuous round, so there is no seam! You can use a stitch marker to help you keep track of the rounds. Then once you reach the width you want, simply finish the cowl with a round of single crochets for a nice clean finish!

The finished size is about 18 inches in circumference by 7.5 inches wide. The stitch multiple for a the starting chains is four, making it super easy to customize this for any size you need.

I chose Patons Canadiana. It is a soft, medium #4 acrylic yarn. It is not only comfortable to wear, but it also gives the cowl a nice drape. Even better, I used only one skein of yarn to make this!

Any similar yarn can be used to make this. Just make sure to do a gauge swatch to recalculate your starting chains if necessary. 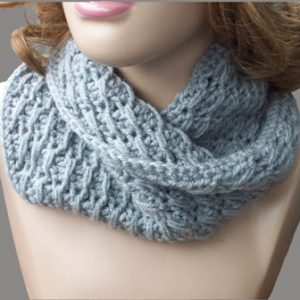 This crochet cowl is worked with a twist for a nice drape. It can be adjusted in size as needed.
No ratings yet
Pin Pattern Share on Facebook