This striped slouchy beanie can be crocheted with one or more colors. I did mine in two, but it might also look good in a solid or as a stash-buster hat.

The beanie is started at the ribbing rows and the rounds are crocheted directly onto the ribbing. The pattern is in a multiple of two, which makes it super easy to adjust to fit any head size.

This pattern provides two methods for closing the top off. For the first hat I decreased the rounds until the hat was closed. Then I thought, what if someone wants to make this hat in a different size? – I did the math and the math didn’t work out evenly. So for the second one I just pulled the hat closed at the last round. And to be honest, I actually prefer the way I did the second one, but the choice is yours. The black and grey is the first hat and the pink and black is the one below.

The hat is turned at every round in order to bring out the beautiful texture of the crunch stitch.

Gauge: 3″ over 10 sts and 13 rows.
Finished Size: 19.5″ in circumference. Instructions are given to modify so it can be made to fit any size.

Finish the rnd as normal. Then bring your yarn over and down to the wrong side of work. Pick up the new color with your hand.

With the new color at the back of your hook, insert your hook into the first stitch made in the round. Yarn over and pull through. (Make sure to only catch the top two loops of the stitch.)

Most likely you’ll see a huge loop from the previous color. Give the loose end a gentle tug to pull that tight.

This is what it looks like after you’ve joined the round and pulled things tight. The active yarn is on the right side, while the other yarn hangs loose on the wrong side.

Turn your work and skipping the joining slip stitch, work your first stitch into the next slip stitch. Refer to arrow above.

Here you see the first half double crochet stitch made in the new round.

Rows 2-64: Working in bls only, ch 1, sc in each sc across. Turn. (9 sts) Continue with this row until you have reached a desired circumference making sure to end in an even number of rows.

Alternative (Use this method if you made more or less Ribbing Rows): Instead of working the following decrease rounds, continue with the pattern rows as established until you have reached a desired height making sure to end with CA. Then FO leaving a long tail to weave into the last round. Pull the tail tight and secure. For my second hat (64 sts in rnd as well) I finished at rnd 42 and weaved the tail end into every second hdc. (LOVE it! It’s a quick and easy way to finish a hat. Much simpler than doing the decrease rounds, but you can choose what you like best.)

Decrease Rounds (if you have 64 sts in rnd) 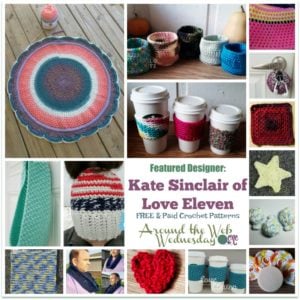 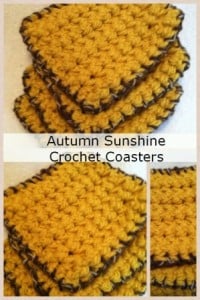